Oslo is the capital city of Norway and sits on the country’s South coast at the head of the Oslofjord – it is often the first stop on your luxury Norway holiday. It has been made famous for its eco-friendly credentials, green spaces and museums. It is the third largest city in Scandanvia and has grown dramatically in wealth through shipping and oil. Many of the museums are centred around the Bygdøy Peninsula which is a residential forested peninsula with a rich maritime history. The largest museums are both The Fram which centres around 19th century polar ship and the Kon-Tiki museum which is mainly in tribute to adventurer Thor Heyerdahl who made history from his Kon Tiki expedition in 1947. History is incredibly rich here and during your holiday in Norway we can arrange privately guided tours of this amazing city, alternatively you can easily make your way around this friendly and safe city alone.

Oslo is also home to the Akershus Castle which was built as a Royal Residence in the city. The castle is now open to the public however in the past it has been used a military base during WW2. The castle sits fairly centrally in the city and works well alongside the Norway Resistance Museum which highlights the resistance to Nazi occupation during WW2. Of course before your tour we will be providing comprehensive details on how to get around and where to go.

Famed for its green spaces one of the main highlights to Oslo is the wonderful Frogner Park which was originally the grounds of Frogner Manor which sits in the South of the park. The park totals 110 acres of gardens and grounds and includes Norway’s largest collection of roses with an estimated 14,000 plants and 150 different species. The park also has one of Oslo’s most popular attractions, the Vigeland Sculpture Park which has more than 200 sculptures by the famed artist Gustav Vigeland.

The City also has some exciting modern projects such as the Oslo Opera House which is home to the national Opera and ballet. Opened in 2008 this modern architecturally unique building is situation in central Oslo and has a capacity of 1400 people. It is believed to be reminiscent of a floating glacier in the waters of Oslofjord.

Oslo is also fast becoming and exciting and vibrant city on the food front. They are lucky to have a number of young and upcoming chefs who are redesigning the way we think about food. In light of this there are various fine dining restaurants around the city where they specialise in mixing the old Norwegian culinary traditions with the innovative and modern twists. An example of this is the Michelin star restaurant Kontrast in the vibrant Vulkan area. It creates new dishes on a daily basis depending on the organic ingredients available at the time.

To the north of the city is the Holmenkoll which is a large and iconic ski jumping hill and museum which sits underneath the famous ski jump which is believed to be the oldest of its kind in the world. It is also perceived to be the heart of Norwegian Skiing for over 100 years. The museum was founded in 1932 and the world’s oldest ski museum contains 4000 years of Skiing history with rock carvings dating back to the stone age.

It is an exciting starting point for many trips into endless wilderness and culture which the country offers. 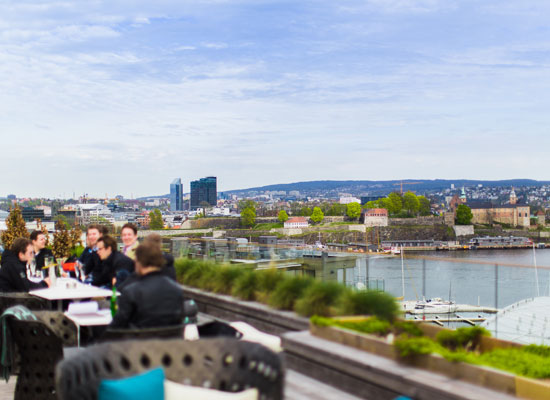 What you can do: Explore Oslo, or the private Wilderness The Thief has access to.